What a nice surprise to get home, and find in our mail box a package all the way from England! I was thrilled with the packaging, and the stamp that read: “Royal Mail!” with the picture of Queen Elizabeth. Ohhhh, I felt so special…:) 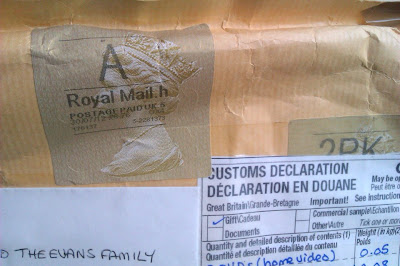 As we opened the package both hubby and our son were excited. Of course, my son instantly spotted the apple flavored candy, look at that smile! While my husband looked at the coins and flags. 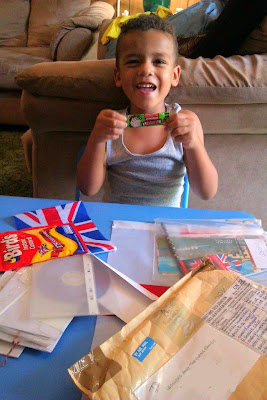 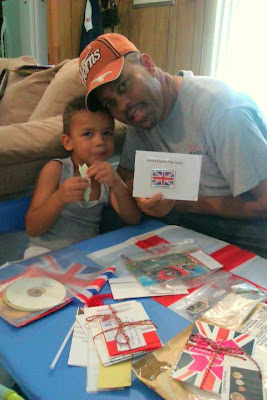 Now let’s go over the contents of our “Royal Mail” hahaha (I had to add last statement!):

~Flags of England and United Kingdom

~A letter with pictures

~A cute package with colorful yarn and a homemade bookmark tag that looks like a gift! In it was a postcard of the Olympics :)with two sheets: a “Design a Medal” and “The Olympic Logo” so little one can color, and draw. Included also was an interesting fact sheet of where the Olympic medals are guarded and locked during the Olympics. 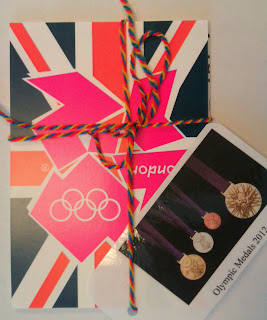 ~Bird’s Instant Custard. In order to make this I will have to look for the equivalent in measurements for the US. 🙂

~An Oxford packet that included a collector’s pin, three beautiful postcards, and one of the University of Oxford, small map, and an Oxford pencil.

~Two homemade DVD’s. We enjoyed watching the DVD of the area where the family that sent us the package lives. We were also pleasantly surprised to see a Burger King in the main shopping area; and listening to the music in the background by the “buskers” (people who play music in the streets). Both DVD’s were fun to watch, and made us want to go to Oxford and visit. 🙂 Check out the video below: 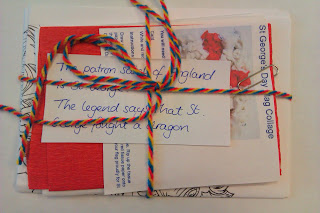 We had lots of fun going through the contents, and learning about Oxford, England. A special thanks to the wonderful family that sent us this package, and that allowed us to post one of the videos.

Now we’re waiting on two more swap packages from Norway, and Qatar. Until our next swap!