Receiving swap packages from around the country and the world is fun!

We participated in two swaps: Group 66 and Group 88.

In Group 66 we had South Africa (received, and will blog about it soon!), Norway (still waiting on the package); and two states: Hawaii, and Florida. We received both swaps from Hawaii (you can read more about it here), and Florida.

In Group 88 we had Qatar (waiting on the package), England (received, and will blog about it soon!), and we received both states: Oregon and Ohio.

Check out the wonderful packages that the families put together from Oregon, Florida and Ohio.

Worldwide Culture Swap from the state of Oregon (Group 88): 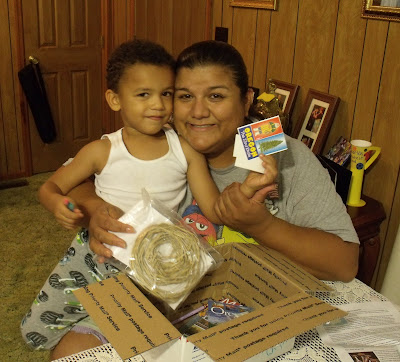 As usual our son was thrilled to see a box on our doorsteps. We received:

– A box of dry roasted Oregon hazelnuts. The state nut. 🙂

– A local map/guide of Portland, Oregon.

– A brochure of the Lewis and Clark historical park.

– A bag with raffia, and instructions on how to make a cordage.

– A letter with a picture of the family who sent us the package. Of course, my 4 yr. old was excited to open the box, and looking through it’s contents. He immediately grabbed the stickers (he loves stickers). He was indeed fascinated with the “Thunder-egg” (geode) rock (he collects pebbles, and rocks at home). The Thunder-egg is also the state rock, and though it doesn’t look like much in the outside, once cracked open you will see an exquisite beauty inside. We haven’t cracked open the rock, yet. I’m going to have Daddy help with a chisel and hammer to crack it open.

Worldwide Culture Swap from the state of Florida (Group 66): 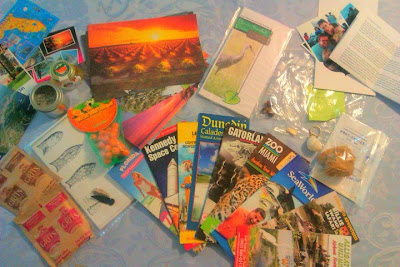 We received our swap package from the great state of Florida! I love looking at my son’s face filled with awe and amazement as he looks through the contents. In this swap package we received:

~Brochures of wildlife, and tourist areas of Florida.

~An alligator teeth – the most fascinating object in the package :).

~”Points” – a replica of a very rare and expensive arrowhead made by the native people in the region.

~Instant grits (a Southern favorite), which was delicious!

~Lychee seed – comes from the lychee fruit that is sweet and rich in nutrient.

~Sand, and a shell key chain.

I was very impressed on how well this package had been put together, the wildlife and points (arrowhead) brochure was neatly placed inside a clear bag. There were notes on all of the postcards, and pictures. I really appreciate the time this family has taken to get their swap package together.  My son loves playing with the sand, and then putting it back in the tin can.

Worldwide Culture Swap from the state of Ohio (Group 88):

This was another fun package!

~A handwritten note in a beautiful card with a picture of the family making the shapes of O-H-I-O! (Really cool!)

~Information on some mammals found in Ohio

~Information on Amish Country with a link

~A book titled “Presidents of the United States” (my favorite) and print outs of the eight presidents that actually came from Ohio. Ohio is also nicknamed “The Mother of Presidents!”

~A bag with sand with lucky stones, beach glass, and snail shells

~Brochures and maps of the area

~Sticker sheet with the name O-H-I-O

Until the next culture swap!