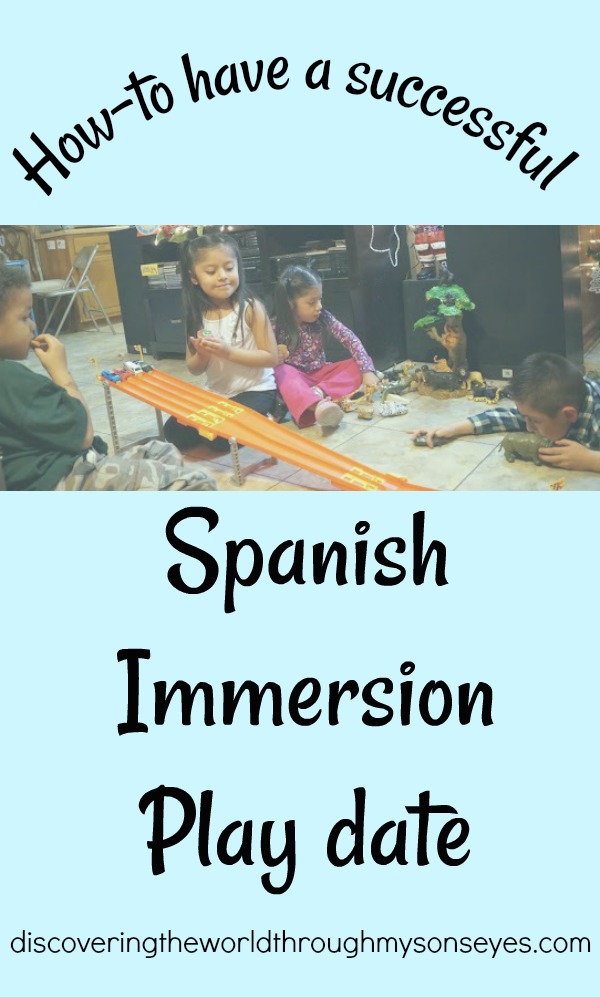 If you’ve been following our bilingual journey you will understand the magnitude, and importance of our first ever Spanish play date!

You see, we live in an area where Spanish is the minority language, and pretty much non-existent. I know how important it is for a bilingual child to be immersed in the minority language, and what better way than with immersion through play. However, in our case living in a small Southern town I have a hard time finding Spanish playgroups, and let alone Spanish speaking folks! But I still held on to hope that I would find Spanish speaking friends for little one.

Hubby and I go to a Mexican restaurant quite frequently for lunch. I’ve tried a couple of times to initiate small talk with the waitresses there (everyone is Latin), but haven’t had much of a positive outcome! So one day while dropping my son off at school I saw a lady who works at the restaurant dropping her kids off, too! Ah! This was the perfect conversation starter!
I approached her one day during lunch time at the restaurant. She actually has a 5 yr. old son, and babysits two girls ages 4, and 3. We talked about the importance of speaking to the children in our minority language, and I told her quite frankly that I was looking for Spanish speaking friends for my 5 yr. old.
Tip:  Get out of your comfort-zone!

After a few conversations we finally agreed on a date for our Spanish play date!  I was so happy, you’d think I’d hit the jackpot! Well, truth be told, I hit the “playgroup immersion” jackpot! I shared the great news with my son. He, on the other hand wasn’t too thrilled. Uh oh! He told me that he was shy, and that he didn’t know his “new” friends. I told him not to worry because I was going to be with him all the time. He was also concerned about his Spanish, and not understanding the kids. Again, I reassured him that I’d be there. I was starting to worry that the kids wouldn’t get along well or understand each other.
Tip:  Set a date to meet with the kids! It can be a park, or if you feel comfortable enough it could be in your home.  Reassure your child that he’s just going to play and have fun. No need for the added pressure of speaking in the minority language.

Nevertheless, I had a plan in place! We (including adults) played Bilingual Zingo (English/Spanish) to break the ice. Then we had story time, and crafts. Afterwards, the kids played freely on the floor. They spoke to each other in Spanish, and I saw how comfortable my son was speaking to them in Spanish. They talked about the animals, and which cars raced the fastest.

Tip:  Have some board games, toys and books for the kids. Invite the parents to join in the game, too.

While they played I talked to the mom, and she mentioned that they too were nervous about the play date! And how happy she is that the children seem to be getting along well. We talked about our countries, Mexico, and Puerto Rico, about family; and maintaining the Spanish language interest in our children in an all English environment.

All in all, our Spanish immersion play date was a success! I foresee many future Spanish play dates! 🙂 Doing a happy dance!

Just before the year ended I wrote a wonderful post about our bilingual year in review. Little did I know that I would be sharing with you another great accomplishment to be added to this year.  I’m so happy, and blessed to see my son’s Spanish language growth.  All I do is smile when I hear him speaking in Spanish.  If you’re doubting your capability to teach your child another language please remember it’s never too late to raise bilingual children.

Have you been successful with play dates in your minority language? Please do share by commenting below, and if you enjoy this post please share, or pin!