In my constant search for bilingual books, and websites I came across Read Conmigo. Read Conmigo is a literacy program that promotes English/Spanish bilingualism. When you sign up on-line you receive free access to books, activities and resources. You can download the books to your computer as a .pdf file or to your tablets or smart phone!

Upon signing up, I received via regular mail an actual hard copy of one of their books: Animals Are Unique Just Like You “Los Animales Son Unicos Como Tú” How cool is that! 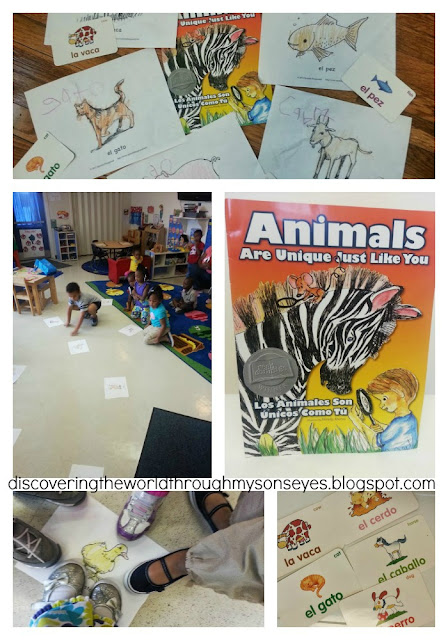 I used this book to kick off day 6 of the Spanish language summer program. I love that their books are dual language. You can read in both the target language Spanish, and/or in the community language English. For the Spanish lesson I read the book in both languages.
Once we finalized story time we reviewed the animal vocabulary found at the end of the book. The names of the animals with pictures are in both English and Spanish.  My little helper was saying out loud the names in Spanish, and the children repeated.
I also printed out the Spanish animal kit (coloring pages, flash cards, etc.) that can be found on Spanish Playground.* The night before the Spanish session my child colored the full-size pictures, and wrote the names of the animals. During the Spanish session I would show the picture or flashcard, and my son would say the name in Spanish.   We sang  Boca Beth’s “The Animal Song/La canción de animales” and I especially enjoyed watching my son belting out those notes singing….
♫ Hay un perro afuera,
Hay un perro afuera,
Hay un perro afuera,
¡El dice woof!
There is a dog outside,
There is a dog outside,
There is a dog outside,
He says woof!♫
To end our session we played a game!   My son spread out the full-size pictures on the floor, and he’d call out the names of the animals in Spanish. The children would run to the animal and step on it. However, the catch was that they had to say the name of the animal in Spanish before they stepped on it!  It was fun, and kept the children on their feet!  Click here for a full  list of suggestions and activities that you can use with the Spanish animal cards.
My son looked so confident and comfortable singing in Spanish, and calling out the names of the animals. It fills my heart with joy, and he feels so important and special!
*A special thanks to Spanish Playground for the complimentary animal pack! ¡Gracias!