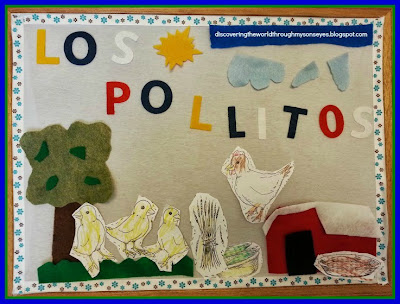 I grew up listening to the Spanish children’s song  ♫♫”Los pollitos” (The Little Chickens)♫♫, and it was a song that I wanted to pass on to my child.  When we started singing the song he loved it! It didn’t take him long to learn the intro: ♫♫Los pollitos dicen pío, pío, pío. Cuando tienen hambre, cuando tienen frío. La gallina busca el maíz y el trigo…♫♫
He loved the song so much that he wanted to share it with his friends at summer camp, and I was happy to oblige! I was pretty excited when I found a guide for “Los Pollitos” from Spanish Playground. The guide includes: coloring pages, cut-out for stick puppets, etc., and I love it!
In preparation for the Spanish language summer program little one and I practiced the song.  I used the guide to tell the story, and  he helped me cut-out the puppets. I pulled out the Spring felt board we created, and cut-out a felt barn.
I was pretty excited when he started looking for the felt letters to spell out “los pollitos” because he would say the letters out loud in Spanish, and then as he was looking through he’d say, “Esta no es la letra. Aja te encontré”… I about died! Ha! He was talking to himself in Spanish!
For the Spanish session we had story time, sing-along, a little chick that actually chirped, and a YouTube video of “Los Pollitos.” 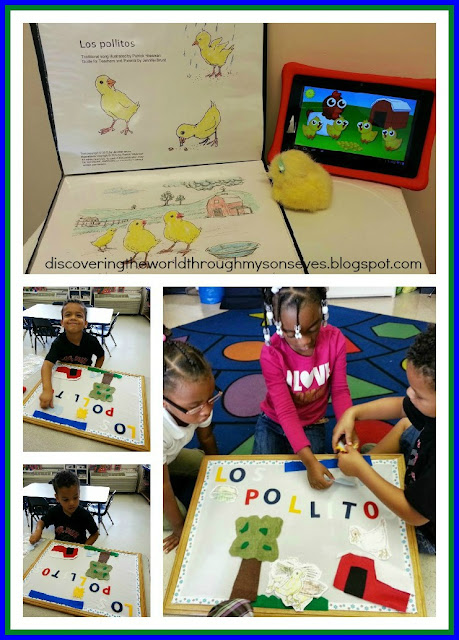 I noticed some songs have a slight variation towards the end, but if you’re interested in the lyrics click here.

The children had a great time, and my son enjoyed taking the lead in singing the song. Until our next Spanish session!
¡Hasta luego!
Spread the love
2013-07-08
Previous Post: Spanish Home Lesson: Learning the ABC’s in Spanish (El Abecedario)
Next Post: Angry Birds Party Favors