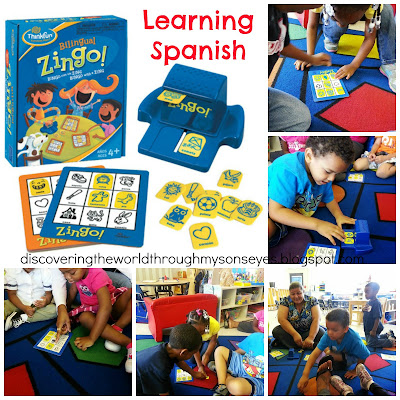 This summer I really, really wanted to enroll little one in a Spanish language immersion camp, but it wasn’t possible this year.
However, I wanted to keep my son’s “momentum” going. He had just graduated from his Spring Spanish language session, and is soaring with confidence! How was I going to do it? Especially when the opportunities to be exposed to the target language in my community are zero?
So I reached out to the awesome blogger, mother, and Mandarin Chinese language instructor Amanda! She is also better known as Miss Panda Chinese. She gave me some wonderful ideas, and of course I ran with them! One of her tips was to create a group learning opportunity. You can read about her awesome multilingual parenting tips here.

Afterwards, I met with the director, and teacher of my son’s summer camp; and they approved for me to volunteer a Spanish Language Summer Program!  Although, I’m quite aware that the children in my son’s summer camp have little to none exposure on the Spanish language, this will help my son showcase his knowledge of Spanish. Therefore, he’s been designated as my little Spanish helper.

For our first Spanish Language Summer Program we did some singing and played a board game.
We kicked off the Spanish lesson with the catchy song from Hap Palmer: ¿Cómo te llamas? Every time they heard the question, “¿Cómo te llamas?” The children would say their names. Little one and I sang:

Shortly after we sang the song we played the Bilingual Zingo! Since I didn’t have enough boards for all the children so we paired them up. My helper would call out the animal names in Spanish, and show the chip to the children. It was such a fun game that the children wanted to play again. 🙂
To end our Spanish session for the day we walked, galloped, tip toed, ran, skated, and hopped to Greg and Steve’s: Listen and Move in both English and Spanish! The song starts in English, and then instrumental (to see if the children can remember what the sounds tell you to do). But, instead I would say it in Spanish. 🙂
Needless to say the children were excited, and wanting more! I guess they will have to wait until our next session.
Did you know that board games are a great way to teach a second language? Becky from Kid World Citizen has some great suggestions that you can find here.
How do you teach your children Spanish?
Spread the love
1
1
Share
2013-06-21
Previous Post: The Importance of Multilingualism and Travel in Our Familia
Next Post: Versatile Blogger Award