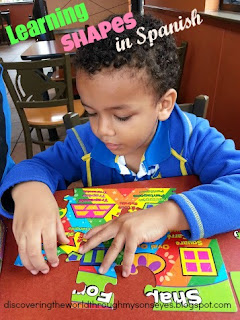 Little one has been verbalizing the shapes in Spanish thanks to Pocoyo’s TV show!  Having him watch his favorite cartoons in Spanish is paying off! To reinforce his shapes in Spanish I found a cool multilingual puzzle at the dollar store! It’s in English, Spanish and French!  I could not pass on not buying it so I bought it and used it for our Spanish home lessons.  I also had at home Spanish flashcards with the shapes.  He loves puzzles, and had fun putting it together as we practiced our shapes in Spanish.
I also had him draw the shapes, and he wanted use the same colors as the puzzles. He cut them out, and glued them on to a construction paper.  We used the flash cards, and the puzzles to learn the shapes in Spanish.  He had fun putting the puzzle together, and drawing the shapes.
During this session we also went over the colors. We also looked for things around the house with the shapes that he had just learned.
What fun things do you do to teach your child another language? Would love to hear from you! Please comment, like, share or pin!
¡Hasta luego!
Spread the love
2013-05-14
Previous Post: Backyard Barbecue Bloghop: Grilling Season
Next Post: Blogger Sunshine Award