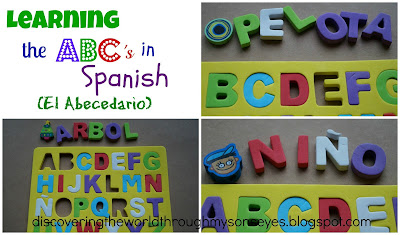 Little one has been practicing his ABC’s in Spanish, and we even made a toilet paper roll train out of it.
However, we need to continue with the reinforcement. I found at the dollar store an alphabet foam with an “Ñ”!!! I was beyond thrilled because it was in Spanish, and I just paid 50 cents for it! 🙂
Without even saying a word to my son, he immediately grabbed all of his small erasers, and started matching them with the letters of the alphabet. When in doubt, he asked me what was something called in Spanish.   We also made words with the alphabet.   He also practiced tracing the letters of the alphabet with the Spanish alphabet dry erase binder that I made for him. The binder idea I found here, and it was easy to make it into a Spanish one with the inserts that I printed off from here. 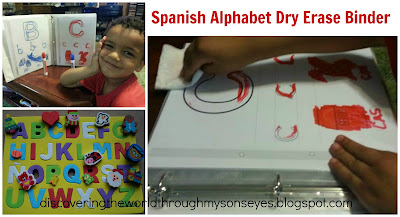 This was a small and simple session on how to practice, and learn to write your ABC’s in Spanish.   I am so proud of my little man! His initiative continues to motivate my drive to teach him Spanish!