In: Preschool Spanish, Spanish for Kids
I have been pondering on how to best utilize The Little Pim videos in Spanish that I purchased a few months ago.  One of the challenges that I have found with the videos is that little one looses interest after the first 15 minutes. So I had to bring it up a notch so he can actually watch the video, and have fun! 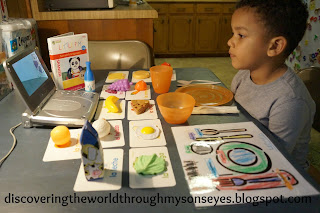 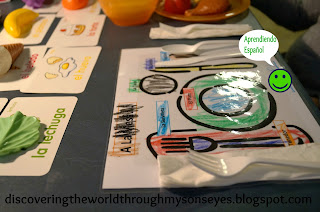 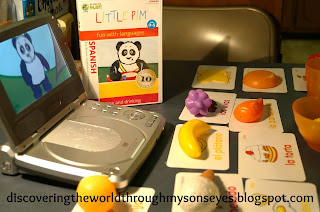 We spent a good 45 minutes learning Spanish with the Little Pim video. He enjoyed grabbing the pretend food items, and placing them on his plate. He was excited that he already knew some of the words in Spanish; and we pretended we were in a restaurant.  (Yes, I had to get another set of utensils, and plates with cup for me to use.)
Updates:  (more like anecdotes)   🙂
I’m amazed of his progress, and the one thought that comes through my mind is that I can actually pull this off! I can actually help my son learn Spanish!
Are you teaching your child another language? Do you have any fun anecdotes that you’d like to share? Please comment, like, pin or share!
¡Gracias y hasta la próxima!
Spread the love
2013-03-27
Previous Post: Book Review: Sofia en una Aventura por la Selva
Next Post: Kid Friendly Macaroni Tuna Salad {Cooking With My Little Chef}