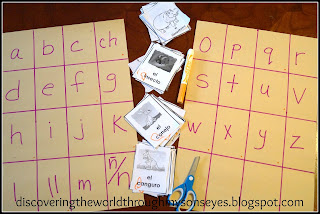 For little one’s at-home Spanish lessons this week, we started practicing the alphabet in Spanish. We used animal flashcards that I found here, and I printed a set.  (Note: The set doesn’t have all of the animals so I had to create additional cards for the missing animals in the alphabet). To make it easy and fun for him, I traced a table (4 columns x 4 rows) with the alphabet in Spanish on two large sheets of construction paper. He helped by cutting out some of the sheets.

I read the words in Spanish, and he repeated the words. He also traced a circle around the first letter of the animal flashcards. He matched them with the letters on the construction paper. We had fun, and he was excited that he was able to identify some of the animals in Spanish!

After our lesson, he insisted on making a train out of the alphabet. We made it out of empty toilet paper rolls (boy did I have plenty stashed away!)

This was a fun learning activity to reinforce little one’s Spanish.  This can also be used for learning numbers, or even the alphabet in English.

Thoughts, and anecdotes:
I am truly amazed of how much he’s advanced with his Spanish. He’s putting sentences together, and pointing at everything and saying it in Spanish.  We were at a Mexican restaurant having dinner, and he started saying, “Plato rojo, plato azul, plato amarillo, tenedor, cuchara y cuchillo.” He was so proud!
At one point, I asked the waiter for a spoon in Spanish. Little one’s reaction was, “Mommy, they know Spanish, too!” I said, “Yes, they do!” He questions, “Mommy, but don’t they speak Mexican?” LOL Too sweet!
His confusion was because we had been to a Chinese restaurant for lunch, and he heard the waiters talking to each other. He asks, “Mommy, what are they speaking? It’s not Spanish!” I told him, “No, it’s Chinese.”  Can you see the correlation Chinese restaurant employees speak Chinese, Mexican restaurant employees should speak Mexican! Hahaha! I told him, that Mexicans, and Puerto  Ricans as well as other Latin American countries speak Spanish, too.

We continue going to his weekly Spanish immersion classes, and I’ve purchased quite a few books in both English/Spanish; and musical CD’s (can’t wait to share them with you in a future post!)