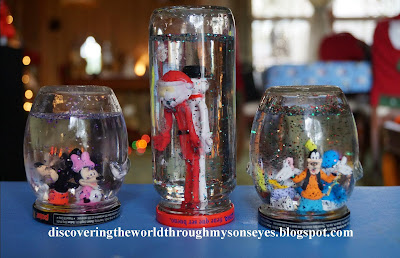 This was so super easy to make that we made four in total! (One is not pictured). All you need is:  Glass jars, hot glue, toys, glitter and water!

I had a few glass jars saved, hot glue, the glitter, and little one was to look for toys to put in the snow globes. It was fun picking out what toys to use, but oh my decisions, decisions on what toys to use for the snow globes! It had to be just the right size!  He ended picking a bendy Santa, a bendy snowman, Mickey, Minnie, Donald, Goofy and Daisy. I had him fill the jars with water, while I hot glued the toys to the lid. Then I let him pour glitter to his heart’s content! We put the lid on with toys, and let him shake his snow globes. He was so excited! He enjoyed it so much, that he wanted to make more! I told him we’d make some more later on to give as gifts. In the meantime, these are beautifully displayed in our living room.
What crafts have you made with your kids to give as gifts or just for fun?  Please share, like or comment!
Spread the love
2012-12-11
Previous Post: Wordless Wednesday: “Our Christmas Tree”
Next Post: Celebrating “Noche Buena” (Christmas Eve) in Puerto Rico