In: Kids Craft, Kids Activities
There’s one thing my son really loves and it’s playing with animals all sorts, all kinds. His Abuela from Puerto Rico sent him a couple of bags of small lizards, alligators, dinosaurs, and butterflies.  He was so excited, and happy!
He has larger dinosaurs in his toy box, and a mountain from a Diego Train Track he has, but how can we make this come together so it can be a fun experience for him?  Of course, I looked in Pinterest and found this great idea: a sensory bin!! I bought the bin, the pebbles, and had little one find some branches out in our yard. 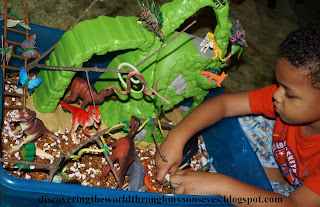 His Reptile, dinosaur, and butterfly sensory bin has come together. He truly enjoyed wrapping the snakes on the branches, and the lizards were hanging from the branches. He wanted his butterflies on the ladder (I tied them for him)… then the rest was left to his imagination. 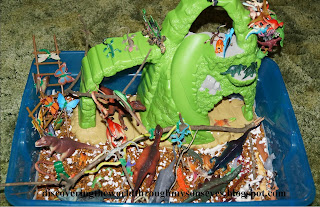 He spent a good while just playing with his dinosaurs, lizards, snakes, and he also had in a corner of the bin some cats, and doggies separated by a branch and fence to keep the dinosaurs away.

Having the bin with lid is a great idea, because as soon as he’s done playing we just put the lid on it, to put away. We’ll slide it under his bed until next play time.