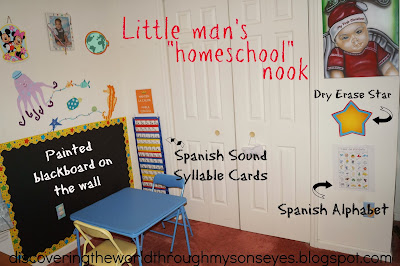 It is very important to me that my son not only is bilingual but biliterate as well.  Being biliterate is just as important as being bilingual.  Therefore, I have put a lot of energy and time to make sure that my son learns how to read and write in Spanish.  When we started our Spanish immersion journey, I wasn’t quite sure when to start teaching him to read in Spanish.
However, when he started kindergarten he was learning to read in English using “sight” words. We don’t really have Spanish “sight” words. So I turned to how Spanish is taught in Puerto Rico. Using the phonics booklet called La Cartilla Fonética  I started teaching him the basics with “a,e,i,o,u.”

Once he learned his alphabet, and the vowels in Spanish I started breaking up the words in syllables.  We started playing games to develop his pre-reading skills.

In my efforts to teach him to read in Spanish I have also incorporated in our Spanish lessons Spanish workbooks that reinforce reading skills.  We have plenty of books, and a large selection in Spanish that I constantly read to him.  Listening to me read to him in Spanish also helps him to associate the sounds of the letters to the words he sees in the books.

He can basically read without hesitation all of the pages in the Cartilla Fonética. I write the sentences on the black board for him to read out loud to me.

Teaching him to read in Spanish at home at the same time he’s learning to read in English in school has been the best decision that I have made. Nevertheless, this wouldn’t be possible if it weren’t for my son’s constant and never-ending enthusiasm to learn the Spanish language.