José Campeche is Puerto Rico’s first and most significant painter of the 18th-century.  He was born on January 6, 1751, to Tomás Campeche a freed-slave who purchased his freedom and to María Jordán originally from the Canary Islands.  Of Afro-Caribbean descent, Campeche learned his father’s trade of decorator and gilder as well his first lessons in painting.  Working as a gilder he was the person responsible for covering in gold paint altars, images, and frames.  Although he painted portraits of famous people in San Juan,  he was most recognized for his paintings of religious imagery.   Mostly for the Catholic church and the Virgin Mary.   José Campeche’s artistic influence came from Luis Paret y Alcázar.  Paret y Alcázar is one of the most recognized painters of Spain’s royal court of the 18th-century.  He took him under his wing and taught him styles, poses, and lighting of royal portraits.

In our last visit to Puerto Rico, I was excited to purchase the children’s book:  José pinta a la Virgen by author  Carmen Leonor Rivera-Lassen and illustrator Mrinali Alvarez Astacio.   This is a delightful, and colorful book of Campeche’s childhood and his beginnings.  The book is Spanish, and towards the end of the book, you’ll find a vocabulary list and Campeche’s biography.

A fun extension activity to complement the book is to paint and/or color an image of the Virgin Mary. I found some cool downloadable printables over at The Kennedy Adventures.   Instead of paint, we used oil pastels to recreate the color scheme of Campeche’s paintings.

You can read more about José Campeche in Spanish here, and in English here. 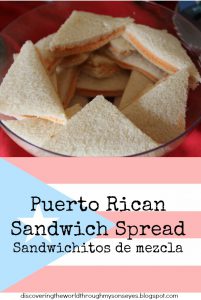 Puerto Rican sandwich spread (sandwichitos de mezcla) is a staple in every party, event or family gathering in Puerto Rico. What is it? It’s a creamy and delish mixture of cheese, luncheon meat, pimentos and cream cheese nicely spread between two slices of white bread.