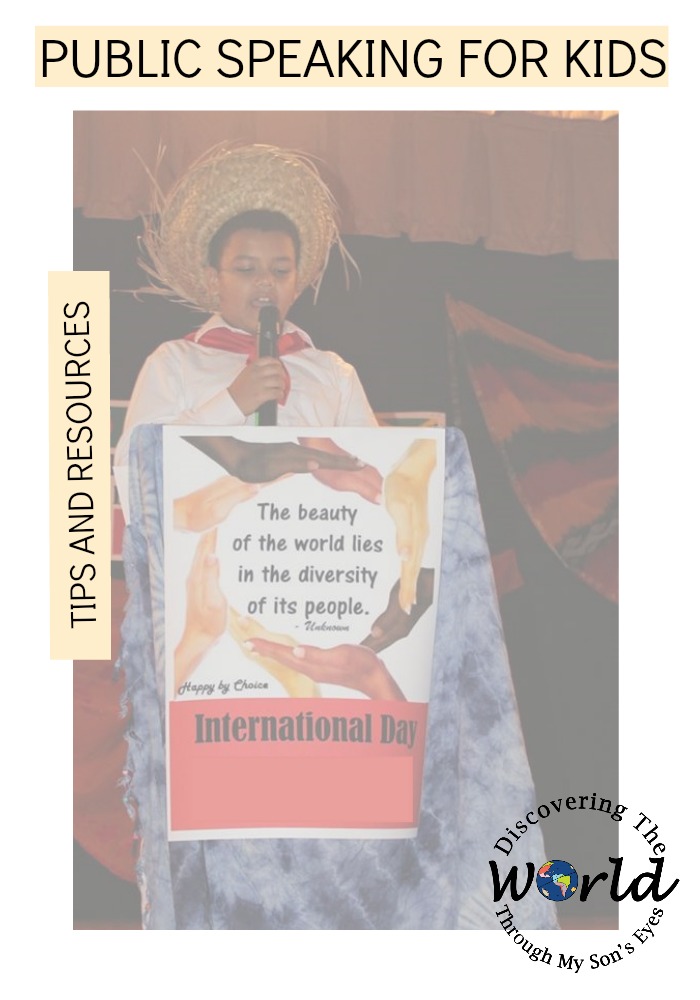 I remember when my 4 year old son was dressed in a suit representing American Politician James E. Clyburn for Black History Month.  At his preschool he was one of the ten kids that grabbed the microphone and recited his 2 lines. The first line was his own name. The second one was,  “I am James E. Clyburn,  U.S. Representative for South Carolina’s 6th congressional district.” This was his first time speaking in front of a public comprised of teachers, parents, and his classmates.

It was also the beginning of many more public speaking events that he’s done for audiences at school, camp and even the community.  During Hispanic Heritage Month he’s been in front of his classroom speak to his classmates about Puerto Rico.  His presentations during Hispanic Heritage Month were not a requirement for his class or a project that was assigned to him.  I approached his teachers, and asked if he could speak to his classmates about Puerto Rico.   It’s  a topic that he’s comfortable speaking about because he’s familiar with it, and a way to instill more pride in his Latino heritage.  My now 9 year old used to be shy and he certainly wasn’t the first one to engage in a conversation.  However, all of that has changed as he continued to speak in public. Now he’s a very vocal, outspoken and sometimes a comedic kid.

Disclosure:  This post may contain affiliate links. If you make a purchase via the links I will receive a small monetary compensation.  Thank you!

In this day and age with an up and coming Z Generation/iGen (the first generation to have widespread access to the Internet and electronics at an early age born between 1995-2012) are spending countless hours in front of a screen. This my friends is not going to help them develop the life-long skill of communicating and public speaking.  Hence, the need to teach them. There are so many benefits such as, building self-esteem, developing confidence, improving their communication skills with peers, friends and family.

With that being said, I’m sharing you tips from our very own experience on public speaking with kids.

1.  Choose a topic that the child is comfortable with.  My son feels more comfortable talking about Puerto Rico, and reading poetry.

2.  Have your child practice his/her topic in front of family.  Daddy and his grandparents were his first audience.

3.  If they speak fast (as my son does) have them speak slowly.

4.  Teach your child to make eye-contact. If they get nervous tell them to focus on one person and gaze from there.

5.  Have them use visuals to prompt speaking. For example, a PowerPoint slide show, index cards, or a paper with notes.

6.  Calm their nerves by reassuring them if they make a mistake to use humor.  Once he was reading the prompt from a slide show, and missed it. He chuckled, and said, “Oops, we’re having technical difficulties” the audience laughed.

7.  Always encourage them to be themselves, and that there will always be room for improvement.

Resources for Public Speaking for Kids

We Should be Teaching Kids Public Speaking in School

Books on public speaking for kids