During little man’s past birthdays we’ve never really had a piñata. Shocker! I know! I guess I was intimidated by the whole papier maché method that I didn’t venture into trying it out. Until, I saw my wonderful friend Jody from Mud Hut Mama’s super, easy to do papier maché leopard piñata!
Since we’re doing a Survivor theme, yes, like the reality show Survivor. I thought we can make a jungle animal piñata so it can go with the theme. Both hubby, and little one are huge fans of the show!

But, instead my child insisted on a bunny rabbit!!! I was like really? Daddy tried to persuade him but he was adamant that he wanted a bunny rabbit. Of course, it’s his birthday….so a rabbit piñata was in the works.
I followed Jody’s instructions to a tee! I read her post like 10 times before we ventured into making the piñata, and this is the result! This was a collaborative effort between my child and I; and I must say that it came out nice. Little man loves it!!! 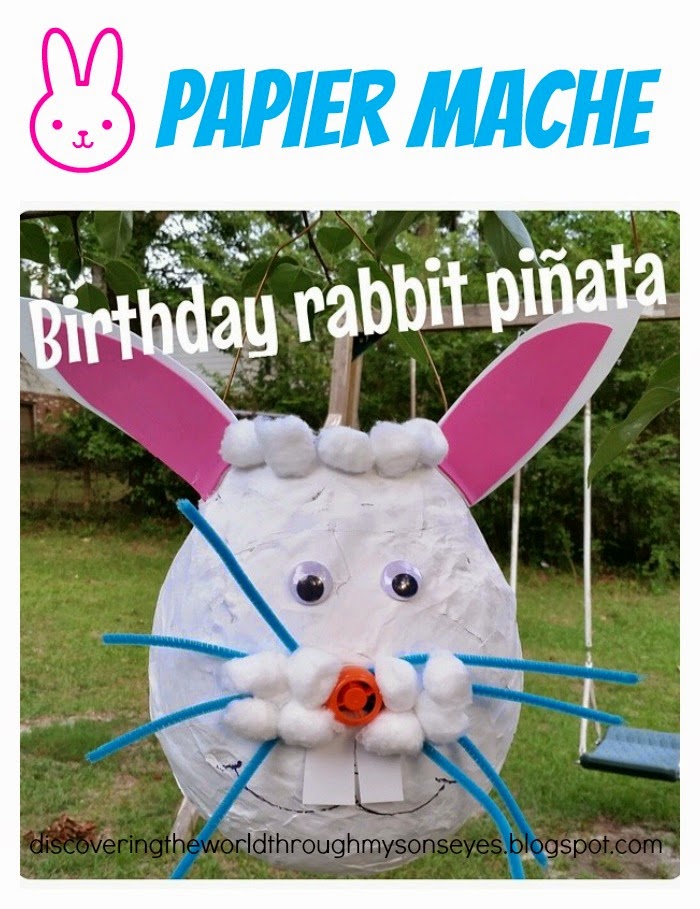 We used a recycled fruit pouch cap as the nose, for the ears and teeth I used craft foam, and we glued googly eyes. We used pipe cleaners for the whiskers, and of course, cotton balls!
The process was quite messy, but fun!!!
The really fun part was painting it, and turning the hardened papier maché into a bunny rabbit!

This is such a cute piñata that you can use for birthdays or even Spring and Easter celebrations.

Can’t wait to share with you our Survivor birthday ideas, and no I don’t think we’ll have anymore rabbits! 🙂