Our Son’s Heritage Board

When we found out we were pregnant with our son I wanted him to be proud of who he was.  I wanted him to celebrate his beautiful, and colorful diversity.  His multiculturalism, and his heritage.

It wasn’t until he was 3 1/2 years old that I  found a great way to talk about race, and where he came from.  I came up with the idea of creating a “heritage board” for him.

We went on from where he was born, where Mami and Papi were born; we put pics of us up, and glued some other pics of maps, and things typical to the region (flags, mango from PR, Tainos, Palmetto tree from SC, etc.) 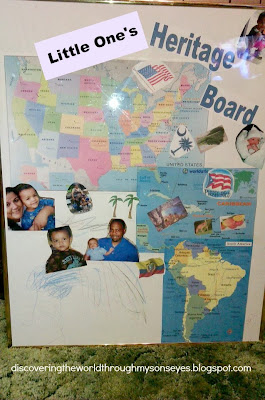 When explaining to him that Mami was Latina and that Papi was Black… making him Black and Latino, he laughs and says “Momma, my shirt has black lines not me!”

I laughed too, and left it there. He was too young too understand this.   He had already been to Puerto Rico like 3 times before he was 3 years old so I showed him the maps, and let him scribble to his heart’s content.

His heritage board hangs proudly on the wall of his room, and we often go over it.  We will both looking forward to adding fun things about his culture and heritage on his board as he gets older.