In: Bilingualism
Tagged: Raising a bilingual child
With: 23 Comments
Traveling to Puerto Rico has never been a “big” deal until now! Our child has been to Puerto Rico many times before. However, this trip was important. It would be our son’s first full Spanish travel immersion trip.

“Mommy, is everything in Spanish only?”

Just having turned 5 yrs. old he was already anticipating what to expect. He worried that he would not be able to communicate in Spanish with la familia, and that he wouldn’t understand. I reassured him that I’d be by his side to help.   He would be fully immersed in Spanish for two weeks, and he was aware of it. Both of us had been working hard on his Spanish, and this would be the ultimate test. We were all looking forward to our trip to Puerto Rico!
His only fully bilingual interaction has only been with me, until he heard the bilingual flight attendant speaking over the intercom system on the plane. First in English then in Spanish. He noticed it right away. Then he started asking: “Mommy, do people in Puerto Rico only speak in Spanish?  Do they know English, too?”   I used this opportunity to show him  the importance of being able to communicate in more than one language.  To ease his concerns, I also shared with him that Puerto Rico’s main language is Spanish, but many people do speak in English or at least understand it.
As we drove through the expressway he saw a huge billboard of Disney’s new movie Turbo. He asked if we can see it, and I said yes. He quickly asked if it was in Spanish, and I told him yes. He was excited! We actually saw the movie twice. During the movie he asked that I translate a word or two but overall he did very well, and understood what was going on.

I have to admit that my familia was very eager to communicate and to talk to our son.  I appreciate their intentions of bonding with him but not in English! 🙂 So I had a strict rule of ONLY Spanish. English with Daddy, and with me only if he needed help to translate.  La familia complied, but it was very hard because I caught them a few times speaking to him in English.
However, even with that small set back I quickly noticed how he was expressing himself in Spanish, and taking it all in!  He would run to his Abuela and tell her something in Spanish like:  “Abuela, el perro está afuera.”  Or he’d ask his Titi how to say “come and play here” in Spanish when playing with his little cousin.

While having short conversations with me in Spanish I noticed how he’d pause to think then he’d speak. He has expanded his vocabulary, and is forming sentences on his own.  He responds to everything I say with a “Si Mami”, and often expresses himself in Spanish. Like for instance he said to his Daddy, “Esto no es tuyo es mío” when Daddy tried on his baseball cap.

A year ago, I remember my son telling me very proudly “Mommy I know Spanish!”  Far from being a reality, I realized that it was time to kick into full force to really make this happen!  Today I look back and see how far we have come! I am so proud of our baby, and I’m proud of myself for sticking with it. Since, I myself had many challenges.

Raising a bilingual child is not an easy task, and it takes a lot of commitment from both the child and the parent. This trip, and seeing my child speaking in Spanish has been the best experience in our travel immersion.  It’s like the “topping” on the ice cream!

Immersion travel is one of the best gifts you can give your child. Have you traveled abroad? Would love to hear about your experience.

This post has been shared at Best4Future’s Wednesday link-up party. 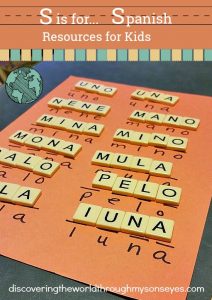 Thanks to technology and the worldwide web we have at our fingertips tons of resources on raising a bilingual child.  For instance, in my case I am raising my child to be bilingual in Spanish.  When I started our language learning adventure I scoured the web for resources, and many of the links listed here are blogs that I follow and admire.