My Bilingual and Bicultural Story: A Second Generation Latina

In: Multicultural Identity
With: 2 Comments
As a young girl, I was always fascinated with multiculturalism, diversity, and learning another language. I proudly boasted that I was half Puerto Rican, and half Ecuadorian. My first crush at age 12 was with a Black boy, and when I graduated from middle school I was looking forward to high school so I can learn French! At home we spoke Spanish, and in school we spoke English so I wanted to learn a third language. Did I mention that I also wanted to travel the world!?
However, Mamá had other plans for us. We relocated to Puerto Rico! We moved when I was 13, my little sister 11, and our baby brother was 5 yrs. old. I was crushed! My plans for learning a third language went down the drain, and we were in a 100% Spanish speaking country, at home and at school. We didn’t have the financial resources to pay someone to teach me French, or the transportation to go the language learning center in the big city capital of San Juan.

Although we could speak, and understand in our Spanish native language, we didn’t know how to read in Spanish. We were bilingual, but not biliterate.  We  learned English during our school years living in the United States.  So my sister, and I promised to always speak to each other only in English so we wouldn’t forget.

Although we knew the language,  we had a hard time adapting to a full Spanish immersion environment.   We learned how to read in Spanish when we started school in Puerto Rico. I had a hard time learning Spanish grammar, and, how and when to use accents on words.   It was a nightmare! Nevertheless, we succeeded and graduated from both high school, and college from Puerto Rico.  I’m proud to say that today my sister is an ESL Teacher, and is traveling the world with her husband, our brother is bilingual (Spanish/English) living in Puerto Rico with his family.

As a second generation Latina now living in the United States I am truly proud of who I am, and where I come from.  I love having the ability to speak, and write in two languages; and to celebrate both my American and Latin cultures.    I married the most wonderful Black man in the world, and I’m instilling in our child a foundation of love and values on which his future life will be built by learning his heritage language; and embracing his multiculturalism.
Spread the love
2014-05-14
Previous Post: Are you Native American, Mexican or Indian?
Next Post: Creative Kids Culture #16 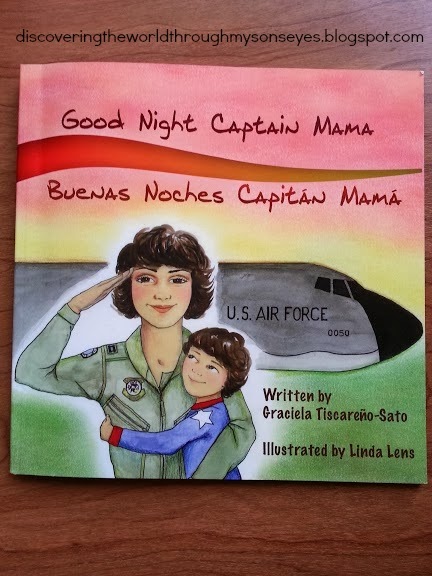 I am so thrilled to be reviewing the first bilingual children’s story book from a Latina Military Aviator Mom. This book is a first in it’s kind. I was lucky enough to win a teacher pack on Mommy Maestra’s back to school giveaway.