Pinterest has spiked my ideas when it comes to kiddie crafts for our son, and I had pinned this Slimy and Sensacional Espaguetis Sensory Tub.

Making “Colorful Wiggly Worms“
We tried this over the Spring on a boring Sunday afternoon. I filled containers with food coloring to make the colored water and 1 1/2 pounds of cooked spaghetti make for a fun filled activity! 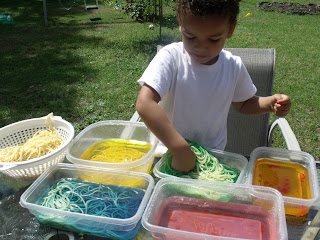 Next I let him place in the tubs the cooked spaghetti, and mix them around the colored water. This is a great sensory activity, that allows him to play with colors, mix them, and feel the texture. 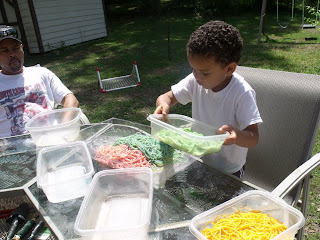 Cutting out letters for hours of fun!

Another fun activity that I found on Pinterest (which gave me some work to do LOL) is to cut out letters from cereal, cracker and other food boxes. I saved boxes, and later cut out the letters. I saved them in an empty mayonnaise jar for him to play with. He would look for letters to make words. Although he can’t read yet, he certainly knows how to find the letters to his name. On a play date with his friend, we decided to make some art work. We used the cut up letters, Bendaroos, and glitter glue. This was the final work of art!
Spread the love
2012-09-12
Previous Post: Homemade Paint + Kiddo = One Happy Child! {Lazy Sunday Arts & Crafts}
Next Post: Capias a Puerto Rican Wedding Tradition