In: Black History Month
As a parent it is my responsibility to teach my son about his Black, and Latin heritage. I remember my first post on embracing your roots and culture, and it’s directed to him so he can learn to appreciate the beauty and richness of both his cultures.  Although he’s still too young to understand  that particular post or even his grandmother’s interview I feel that I’ve already sowed the seeds of heritage in his little mind. Seeds that one day will fully bloom with knowledge and full awareness of his cultural background. 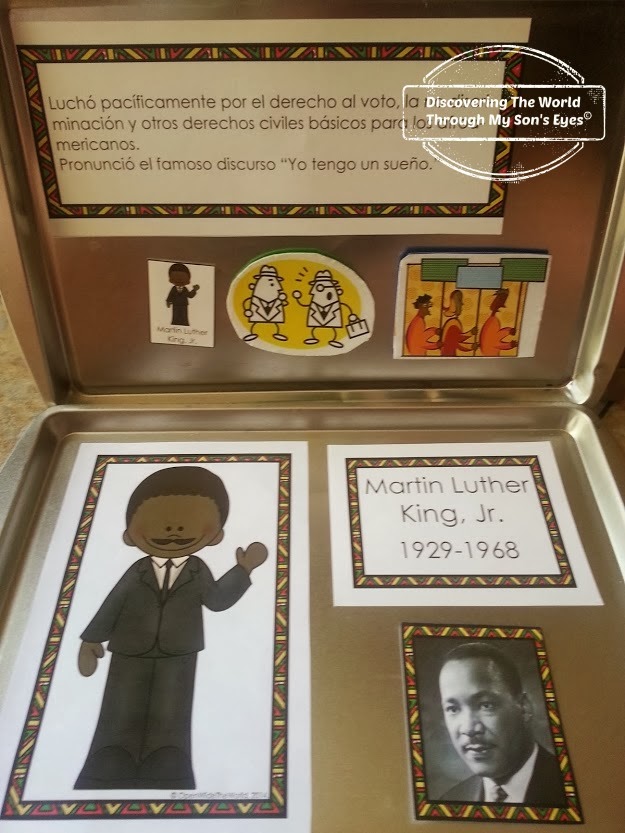 With that being said, I’ve had the opportunity to review a wonderful Black History Month packet completely in Español! Can we say double score!  I was thrilled, and excited to use it with my little man.
However, the grade levels are for 2nd, 3rd, 4th, 5th and homeschoolers. My baby is just in kindergarten! But, keep reading so I can show you how I used this packet for my 5 yr. old. 🙂
This packet includes the following for the 10 historic figures: Ruby Bridges, Frederick Douglass, Martin Luther King Jr., Thurgood Marshall, Jesse Owens, Rosa Parks, Jackie Robinson, Sojourner Truth, Harriet Tubman, and Booker T. Washington.

I went ahead and printed the whole packet! I printed some in cardstock, and glued a piece of magnet in the back: framed clip art images, framed name plates with birth/death dates, framed photographs, and the biography plates. I also printed some on regular paper, and glued them on to a foam. (See pic below) 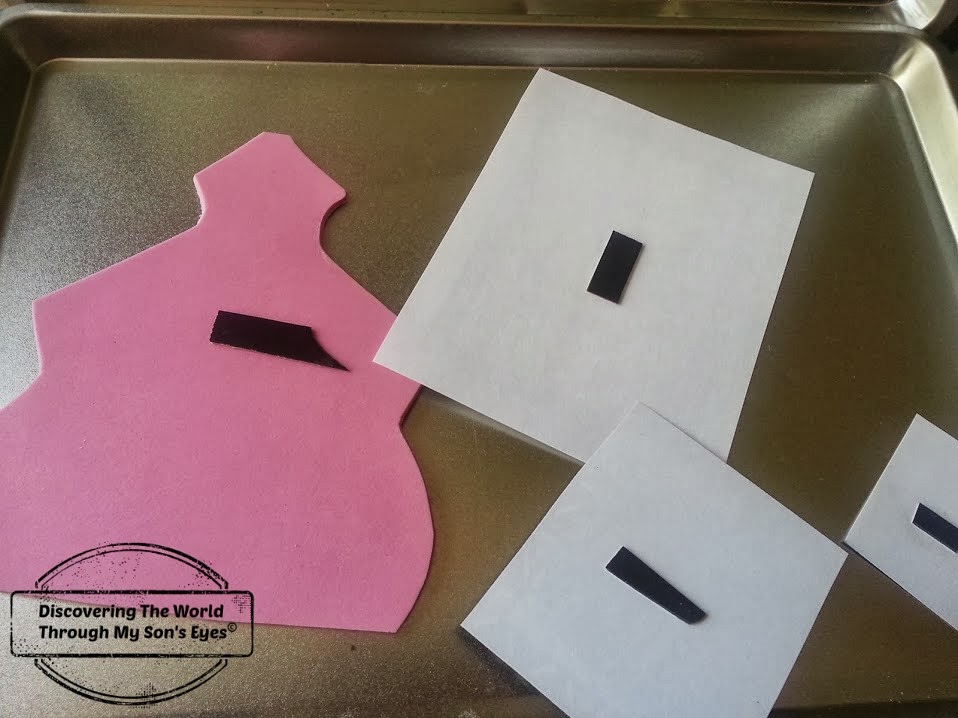 Since little one and I have read children’s book on Martin Luther King, Jr., and Rosa Parks we started our lesson with those two historical Black figures.
I used two cookie sheets that I purchased at the dollar store. First we talked about both Martin Luther King, Jr. and Rosa Parks in English then I read to him the biography plates in Spanish. As I read it he’d place them on the cookie sheet. We talked about King’s legacy, what he did, and the reasons why people were mad at him. I printed some cliparts of two people arguing, and of others marching.
For example, I’d asked him in Spanish: ¿Quién es Martin Luther King, Jr.? and ¿Cuál fue su famoso discurso? He would respond in English, and with my help he’d repeat the answers in Spanish. He’s learning some pretty big words in Spanish such as: derechos civiles, pacíficamente, derecho al voto, discurso, etc. These are not your typical Spanish vocabulary for a 5 yr. old. but I’m thrilled that he’s making an effort to learn them.

Once we finished we’d put it up on our refrigerator. That way we’d have a daily visual of these famous and historical Black figures, and it’s also a great conversation starter in Spanish.

This is not the best picture but note how he put King’s picture upside down? Strangely enough he didn’t put Rosa Park’s picture upside down. When I asked him why? He said, “He’s dead because someone hurt him. But now he was with God, and that God watches over all of us.”
With Rosa Parks we had fun! I asked in Spanish, ¿Quién es Rosa Parks?, ¿Qué sucedió en el autobús?, ¿Porque la arrestaron? He made such an effort to respond in Spanish that I was high-fiving him! He was thrilled!! 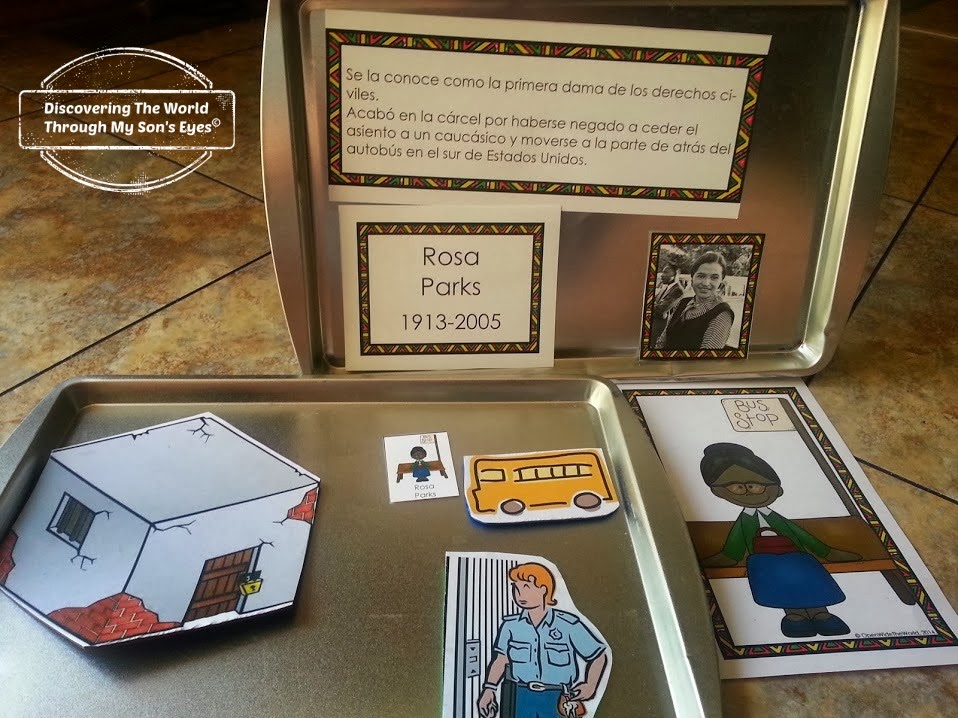 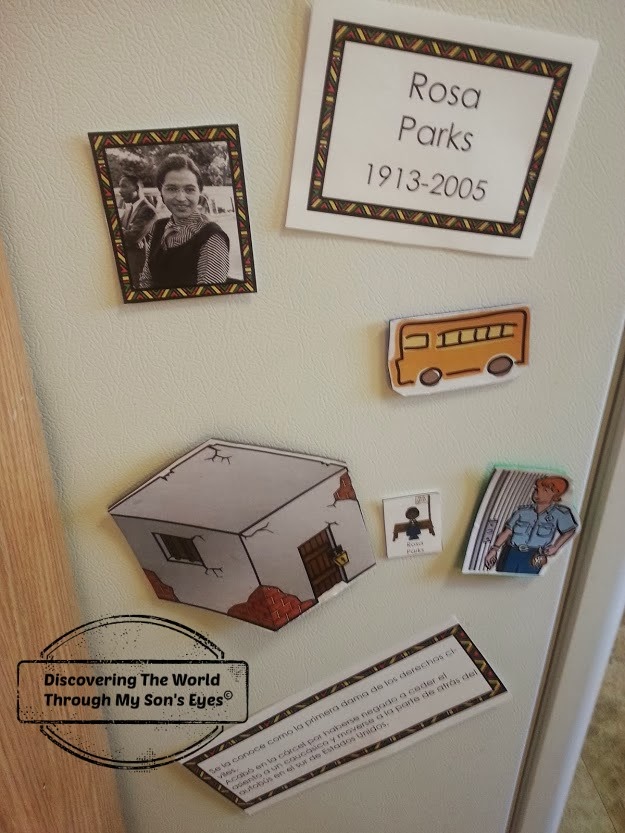 He placed all of the Rosa Parks cards, and clip art on the side of refrigerator. Me made sure to put the small picture of Rosa Parks in between the jail house, and the officer.
What I love about this packet that it has introduced my son to Black History Month in Spanish! Each week we will be discussing two historic figures. By the end of the 5 weeks he will have learned in Spanish a short biography on each one of them. Once completed, we will be able to sit down and play the bingo game included in the packet!
For the remaining 8 historic figures I’ve been very creative! We’ve added houses, railroad tracks, and a map of Harriet Tubman’s route to freedom. For Jesse Owens we have gold medals, and the Olympics symbol. For Jackie Robinson we have a baseball field, and a baseball. The possibilities are endless! All you need is a little bit of creativity, and this wonderful packet to make learning about Black History Month in Español divertido!
This packet will come in handy in years to come. I will be using this as a learning tool as he gets older. It will be useful for when he’s able to write, and develop critical thinking skills to write on the open-ended writing sheet or the writing journal provided in the packet.
A special thank you to Julie from Open Wide The World for this amazing packet!
Disclosure: I received a complimentary copy of this packet for the purpose of reviewing it. I did not receive monetary compensation for this review. All opinions are my own.
Spread the love
2014-02-11
Previous Post: Simple Valentine’s Day Heart Mobile
Next Post: Spanish Text-Rich Home