Is Santa Real? Telling My Son the Truth about Santa 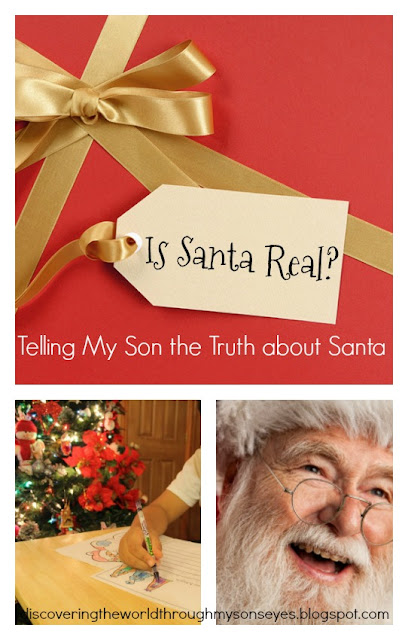 Last night my child sits down to write to Santa and to the Three Kings.  He’s done this since he was a toddler  where he’d scribble what he wanted.

He starts writing, and says to me “This year I didn’t go overboard with toys. I only have five things.”

He then looks up, and asks, “Mamá is Santa real?”

In the past years, many, many kids have told him that Santa is not real, but I reassured him that he was, and he continued to believe. I wanted to keep the magic alive, and the excitement of a jolly old man who brought gifts to him.
Listen ya’ll I was torn last night!
In my mind, I thought, “OK it’s time to tell him the truth!” Then I would second-guess myself, “But why, why now? He’s growing too fast!”
Then I bit the bullet, and casually told him, “Not really.” He looks at me confused, and eagerly looking at my face waiting for an answer.
I told him that Santa as we know him now really doesn’t exist, but a man named Saint Nicholas did. He was kind man who gave to the poor and needy. As years passed St. Nicholas evolved into what we know Santa today. We as parents are kind’a Santa’s helpers.
He responds, “So you and Daddy got me my gifts.” I’d say, “Yes.” Then he said, “No wonder I never got EVERYTHING on my list.” I laughed.
Then I tell him, “Can you imagine if Santa was “real” how many millions of kids he’d have to get toys to? So yeah, that’s why parents are really Santa’s helpers, and the ones that buy the gifts.”
He continues to write, and now he’s on the second letter to the The Magi. He pauses, and looks at me. “Mamá how about Los Reyes (The Magi)? I know they’re real because we read about them in the Bible.”
I said, “It’s the same with them, too. They followed the star to Bethlehem bearing gifts of gold, frankincense and myrrh for baby Jesus. In Puerto Rico it’s a tradition that parents get toys to their children to remember the wise men and their journey to meet baby Jesus.”
As he continued to write I told him, “Just because they are not ‘real, real’ doesn’t mean there will be no Christmas.”
He says, “Yeah, I know.”
I ask him, “Do you know the real reason of why we celebrate Christmas?” He says, “Yes Mom, it’s to celebrate the birth of Jesus!”
When we go to bed he says, “I love Christmas and I love you” I respond, “I love Christmas, and I love you too! Good night!”
Sigh……….. so there goes that! It is bittersweet for me.
He knows the truth! LOLOLOL
Initially I thought he was going to have full-blown melt-down. He took it like a champ, and I truly believe he knew all-along that Santa and The Magi weren’t real.
Nevertheless, we will continue to celebrate the birth of Jesus, and for fun (as long as he’s up for it) he’ll write a letter to the jolly old man, and the Three Wise men.
Spread the love
2016-12-09
Previous Post: Stress-Free Holiday Shopping
Next Post: Queen Girls Collection Children’s Book