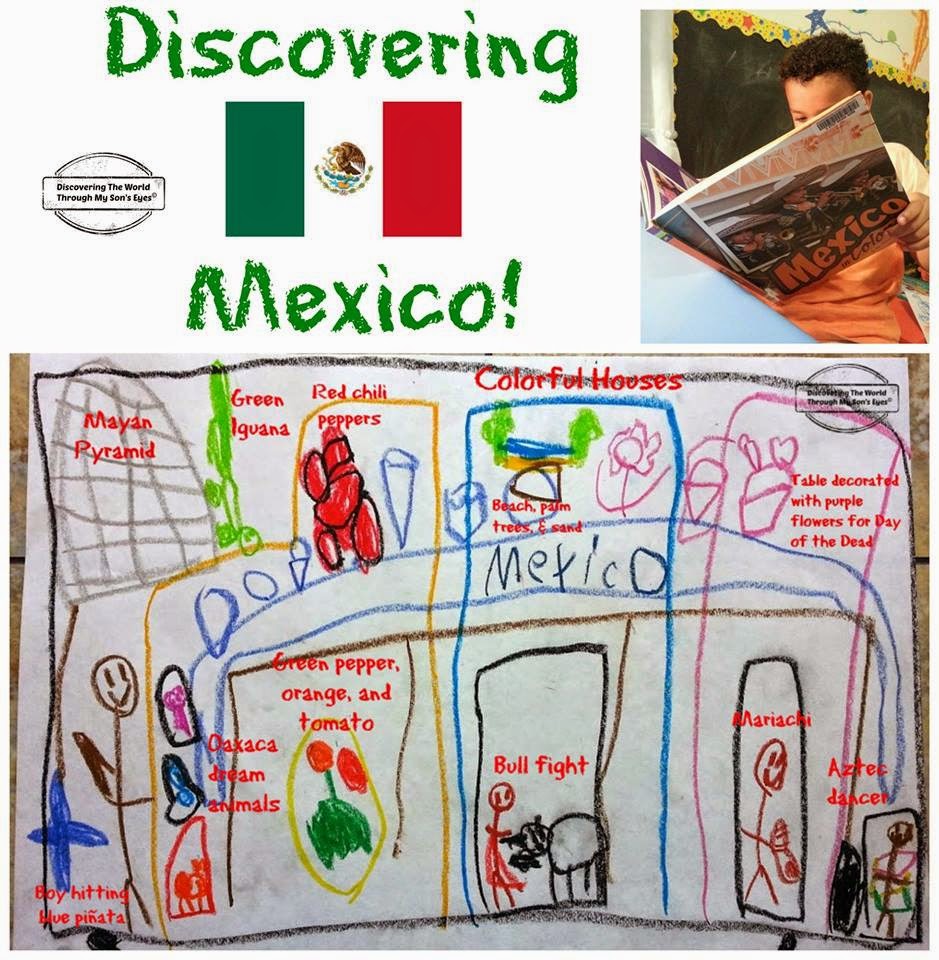 This past May 5th was Cinco de Mayo!  Although we didn’t celebrate with a cultural playdate like we did last year;  we did focus on learning some more about the holiday and Mexico.

Little one recently received a package from Sam & Sofia (Little Passports) from their visit from Mexico. So we were excited to explore the package together. I also had a wooden pen souvenir from Mexico, and two cute Mexican boy finger puppets.
From Little Passport we received the activity sheet, letter, a wooden toy game, stickers, and the boarding pass. 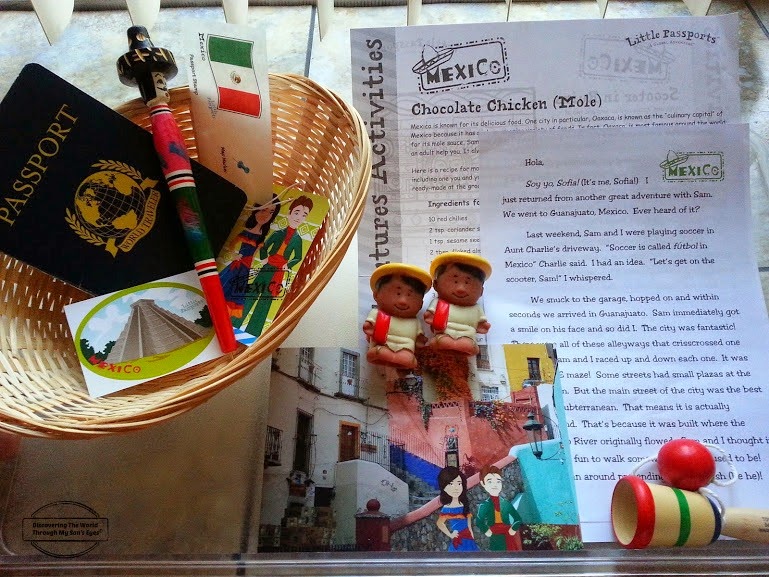 We supplemented the lesson on Mexico with a book, and resources that I found on-line. (See below)

We both absolutely love the book Mexico in Colors. It’s lively, and very colorful!  This series of the book has a color for each page with the description of things, food, costumes, or building from each country.  For example, a gray pyramid, a green iguana, and the orange, blue, and pink paint on houses. Little one was inspired to draw everything he saw in the book.
He learned about the bull fights, mariachis, Aztec dancers, the Mayan pyramid, Oaxaca wooden dream animals, etc. As you can see by his beautiful art work that he really enjoyed learning about Mexico.  He had fun playing with the wooden toy from his Little Passport package, and putting up the stickers on the map, and his passport.
I used a few other resources to learn about Mexico:
I used Open Wide World’s Daily Writing Spanish Prompts. It has themed writing pages to encourage little one to write in Spanish.  We loved the Cinco de Mayo theme pages.
We played a Cinco de Mayo game from Bilingual Classroom Resources on Teachers-Pay-Teachers. The game has a map and flag of Mexico.
We also had fun reading on National Geographic for Kids on Mexico. We learned about some fun facts, and information about it’s people, and culture.

Mexico is the product of a rich Indian heritage, three centuries of Spanish rule, and a shared border with the world’s richest country, the United States. Today, most Mexicans are mestizos, which means they have a mix of Indian and Spanish blood.

Throughout its history, Mexico has been home to great artists. The Maya and other Indians made impressive murals, sculptures, and jewelry. Modern Mexican artists include great painters, photographers, sculptors, and muralists.

Mexicans take sports seriously. In ancient times, losers of a ritual ball game were once put to death. In some dangerous sports, like bullfighting and rodeo (which was invented in Mexico), competitors still put their lives on the line.

I also came across this heartfelt post on why we should celebrate Cinco de Mayo even though we’re not Mexicans. Being that little one is bicultural it was important for me to read this to him so he can understand how important it is to have Latino heritage in this country.  Bebe Lanugo expressed it beautifully in this statement:  “The fact that this day is observed in the United States means that we have a presence in this country.”

Check out the countries we’ve been learning about in our Worldwide Culture Swaps, and Little Passports Countries.