When our baby was six months old he visited Puerto Rico for the first time. We went during the festivities of the Three Kings also known as the Epiphany celebrated on January 6.  The Epiphany is the celebration of the three wise men who followed the star to Bethlehem to offer baby Jesus gifts of gold, myrrh, and frankincense 12 days after he was born.
The tradition is to have the children pick grass the night before and place it in a shoe box with some water for the camels, and place it by their bed on the eve of Three Kings Day in hopes of getting a gift or treats. The grass is for the three kings’ camels who have been traveling from afar.
Puerto Rico celebrates a very long holiday starting on Thanksgiving and going on through Three Kings Day.  Three Kings Day is also a holiday.  Most of the stores and government offices are closed, and kids are out of school.   There are celebrations and festivals throughout the island, and in every home, kids wake up to the excitement of finding their gifts in empty shoe boxes. With that being said, what better way than to have our son celebrate his first Three Kings Day in Puerto Rico?
2009 (top picture)  Since he was too small “Abuela” cut the grass for him! He was quite baffled, and wondering where the grass had gone. 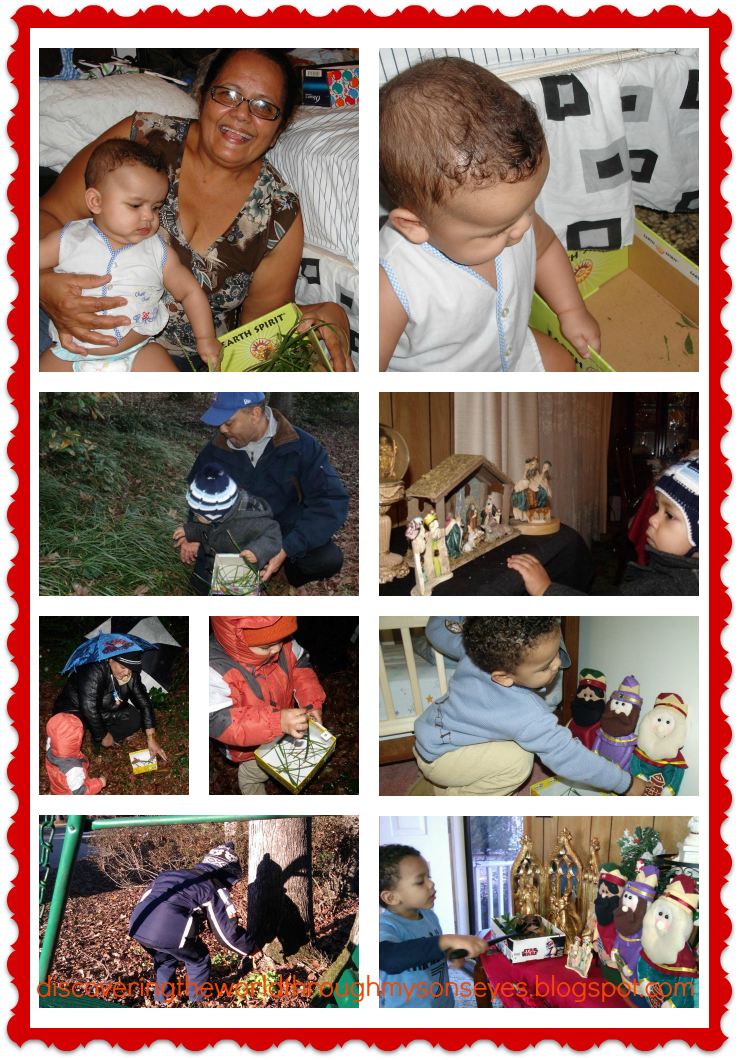 Back home in South Carolina, we’re keeping the tradition going. Though it’s not a holiday here, we keep up all of our Christmas decorations, tree, and of course, a small display of the stable with three kings figurines until January 6.
Christmas in our home goes on until Three Kings Day!  In maintaining this tradition I nurture our child’s Puerto Rican culture and heritage. One that can be easily forgotten especially when we’re away from Puerto Rico.   Here in the U.S.A,  Daddy is very much part of this tradition embracing it, and celebrating it with us. When little one was younger he would go out with him to cut grass.  Rain, shine, or freezing cold weather won’t stop us from getting some green leaves anywhere in our backyard.
As our child has gotten older, he’s also started to decorate his own shoe boxes and gets his own grass. We shared this beautiful tradition with his friends decorating boxes, and reading books about Los Tres Reyes Magos, and our first cultural playdate was a success!
Even if we’re living in South Carolina, USA I want our son to have the best of both worlds. He will leave cookies and milk for Santa Claus, and magic reindeer food for the reindeer (American tradition), but he’ll also leave some grass for the Three King’s camels (Puerto Rican tradition).  He gets double the gifts and treats, and we continue to embrace our culturally diverse familia’s traditions!
What traditions do you celebrate that aren’t necessarily celebrated where you live? I would love to know! Please share and/or comment!
Spread the love
2012-10-02
Previous Post: “Goodnight Moon” The Musical
Next Post: Reptile, Dinosaur and Butterfly Sensory Bin