In: Learn About Puerto Rico
With: 0 Comments

There’s nothing that makes me prouder than my Puerto Rican flag. I’m committed to instilling in my son the same pride that I feel when I see it!  As I look at the flag I can’t help but start humming & singing, ♫¡Que bonita bandera, que bonita bandera, que bonita bandera es la bandera Puertorriqueña!♫
This post was originally published on Jun 11, 2011 to celebrate the 122 years.  It’s 2019 and it’s been 8 years now. The flag is now 130 years old!
Today, our flag celebrates its 130th birthday! On June 11, 1892,  Antonio Vélez Alvarado from Manatí, Puerto Rico was inspired to create our flag while living in New York.

The Puerto Rican flag has two very important dates June 11, 1892, when it was created, and December 22, 1895, when it was first used by a group of Puerto Rican patriots who adopted the flag as a national symbol representing Puerto Ricans. However, it wasn’t until July 25, 1952, that it was officially adopted as the national flag when Puerto Rico became a Commonwealth of the United States.

The Puerto Rican flag symbolizes the patriotism, and unity of over 8,000,000 of Puerto Ricans in the world.

The flag is similar to the flag of Cuba.  The red stripes are symbolic of the “blood” that nourishes the three branches of its government; Legislative, Executive and Judiciary.   The white stripes represent individual liberty and the rights that keep the government in balance. The blue triangle stands for the “Republican Government”, represented by the three branches, and the white Lone Star represents “The Commonwealth of Puerto Rico.”
It is said that the “blue” part of the Puerto Rican flag is a sky blue, and not a deep blue. That the deep blue was used to make it look similar to the United States flag, when Puerto Rico became a Commonwealth. Whether sky blue, or deep blue Puerto Ricans are proud of their flag! It’s part of our identity our, and our culture.
Looking for a fun Puerto Rico flag craft to do with the kids? Check out B-Inspired Mama’s patriotic flag craft. It’s a hand print painted flag, and it looks just like the Puerto Rican flag!  You can also print out this flag from DLTK’s Puerto Rico flag coloring page, and have your children color it.

Here’s to 130 more years of celebrating the Puerto Rican flag! 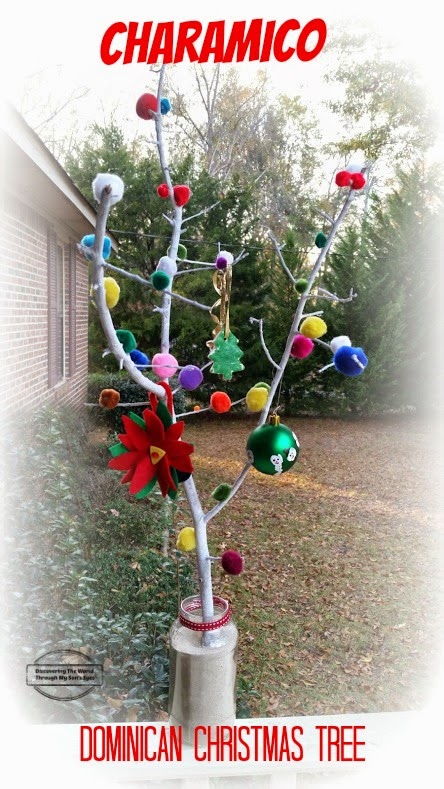 With Christmas around the corner I couldn’t wait to make a charamico with my son! A charamico is a traditional Dominican Christmas tree. In essence, it’s a dry branch that you paint white, and decorate.