Birthday Celebrations from Around the World 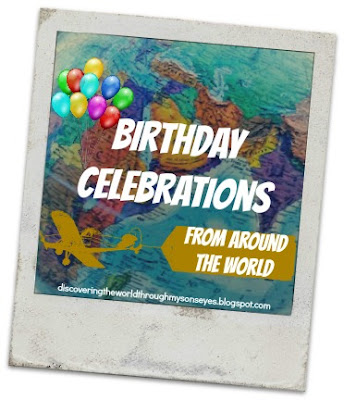 July is little one’s birthday month! I can’t believe he’ll be turning 7 yrs. old! To celebrate such a milestone, I want to take him, and my readers on a virtual trip to look at birthday celebrations from around the world.  We’ll take a look at how moms like you and me celebrate their children’s birthdays with birthday cakes, traditions, themed parties, invites, and so much more! 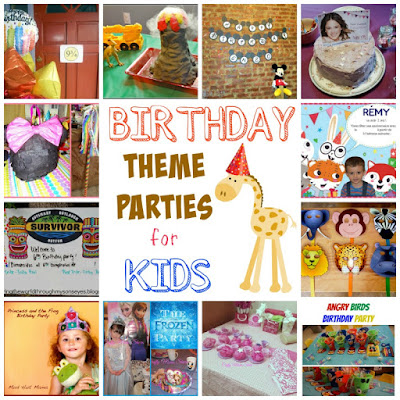 Do you have a Disney fan in your house?  Diana from Ladydeelg shares some wonderful tips on throwing a fun and affordable Mickey Mouse birthday party with some Spanish words scattered here and there! Carrie from Crafty Moms Share offers some great Minnie Mouse ideas for the party food, and activities, and a cool Frozen theme party!

How about a cool party with a smoking volcano! Like the volcanoes from Costa Rica? Yes, you read that right. Leanna from All Done Monkey has gone all out for her volcano loving little monkey with a volcano party!

Jody from Mud Hut Mama has a safari birthday for her daughter, and a go wild and make your own dung activity! And for those that like the jungle and safari adventures like the hit TV show Survivor celebrate a Survivor theme party for them!
There is nothing more adorable than having a beloved French-English children’s book characters as the theme for a little one’s birthday party! Maria from Trilingual Mama even shares her son’s birthday themed party in both French and English.
A Harry Potter fan will love a Harry Potter sleepover birthday party. A Crafty Arab, who is a very crafty momma set-up tons of craft activities for her daughter’s birthday from an invisible cloak to having the girls make their own Gringotts Galleons and Snitches.
For your teenage girls a Violetta themed party will be a surefire hit! This is such a fun party to host and you can get all the details from Trilingual Mama.
I don’t know about you, but I love, love putting together theme parties! They are truly so much fun!  Now let’s talk about cakes!
Ilze from Let the Journey Begin baked a toddler-friendly version of a German Gugelhupf birthday carrot cake, meanwhile Amanda in the Netherlands made this cool super minions birthday cake for her son! 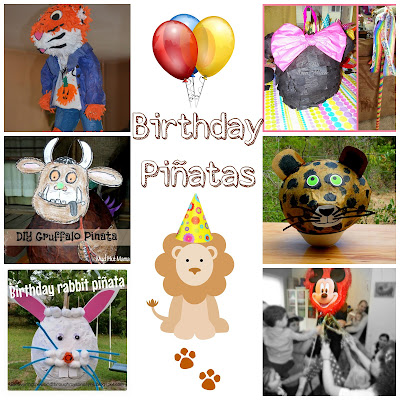 Take a look at Mud Hut Mama’s do-it-yourself gruffalo and leopard piñata.   Inspired by her awesome piñata little one and I made one too! Here’s our rabbit piñata.  Maria from Trilingual Mama shares an adorable piñata in France, and she has so many more! A pretty pink piñata, a Ferrari piñata, Hello Kitty and doll piñata!   As a multicultural mamá in France she offers 5 easy steps to throw a child’s Mexican birthday party in France with piñata an all!

Around the world… we’re flying to Germany, France, Brazil, Korea and the Netherlands!

Jill from Moms Gone Global celebrated her son’s 7th birthday with multiple celebrations, and a cool post on how birthdays are celebrated around the world.
Crazy Little Family Adventure blogs about her South American family celebrating their son’s 5th birthday in five languages in South East Asia. Now that’s a handful there!  La Cité de Vents also celebrates her son’s 5th birthday with a special breakfast of “crêpes” with his friends at school,  and a celebration with the family in the evening.
Germany:
Other than inviting kids over to my son’s party I really didn’t give much thought about birthday etiquette.  However, Annabelle from The Piri Piri Lexicon celebrates her daughter’s first German party and shares some really important German party etiquette that I would have never thought of.
Netherlands:
How do you end a Dutch birthday tradition? Amanda from a Life with a Double Buggy refuses to subject her children to a Dutch tradition by breaking the dutch birthday circle.  Now don’t despair she doesn’t completely do with out Dutch birthday traditions. She does participate in the not so scary Dutch tradition of the traktatie.
Brazil:
I think of Brazil and I think of carnivals, music and fiesta! So speaking of fiesta, Brynn of Brazil asks her Brazilian friends to explain their beautiful and elaborate kid’s birthday party on this fun post in which she talks about guns (yeah guns!) and shares her birthday party experiences in Brazil. Hilarious!
Korea:

Becky from Kid World Citizen has a guest post on an adorable little one’s first Korean birthday, and how his Mom plans incorporates his Korean culture with the American one.

France:
Becky from Rue Du Belverde shares the excitement of being invited to a French birthday party!  Not sure what to expect they left the party feeling content, and with an overload of Nutella!

Speaking of first birthdays let’s take a look at All Done Monkey’s first birthday party ideas, and a monkey smash cake for baby’s first birthday or at La Cité de Vents five ideas for original first birthday; and Finding Dutchland’s Dutch, American and Filipino first birthday.
Want to make your child’s birthday memorable? How about making a birthday time capsule? Or a train birthday countdown?  You can also make a cardboard rocket ship!  Letting your child help in making his or her birthday invites is something that they’ll cherish and remember, and let’s not forget the thank you cards.

Olga from The European Mama shares with us, “In some countries, namedays are celebrated instead of birthdays (or on top of birthdays). For example, my nameday is July 11th (there are several dates for every name). In the Netherlands, kids and adults both sit in a circle- this is referred to as “circle party”. And when guests arrive, they have to congratulate and shake hands with everyone, not only the birthday child!”

Varya from Creative World of Varya shares with us a childhood birthday tradition, “When I was growing up, on birthday morning my parents would hide a gift near or under my bed and wake me up with birthday wishes. We would celebrate on the weekend that birthday falls on or if it doesnt fall on the weekend – the closest weekend. Mom would bake own cake (I loved Napoleon and she always made it for me) , cook and I would have some friends over. We’d eat, play and watch TV.Now that I have my own children, we do it similar way. We also try to hold birthday parties outdoor since we have many friends!

Last but not least, I’d love to share with you some free birthday printables, and a birthday song in Spanish from Spanish Playground and All Done Monkey’s birthday book.

I truly hope you’ve enjoyed this virtual trip around the world and how birthdays are celebrated!  I’m planning little one’s birthday, and I’ve gotten some great ideas from this post.

How do you celebrate your little one’s birthday?
A huge thank you to all of the multicultural bloggers for your contribution to this post!
Spread the love
2015-07-01
Previous Post: All About Me {Free Spanish Printable}
Next Post: Mama Panya’s Pancakes Read Around the World Summer Reading Series