In: Kids Party
Little man is a huge Angry Birds fan! He even came up with the idea of making his own do-it-yourself Angry Birds craft! So of course, with an upcoming birthday he asked for it to be with an Angry Birds theme. I had been pondering on whether or not to go with his request,  since we’re actually going to celebrate his birthday in Puerto Rico with his little cousin this summer. However, I couldn’t resist the idea of having a small celebration with his friends at the summer camp. 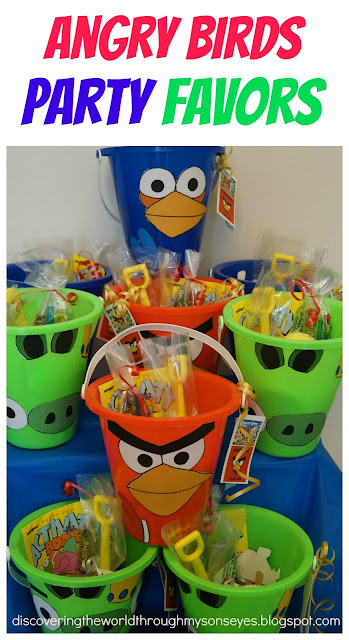 For the favors I used buckets that I purchased last year during the end of summer clearance for 50 cents! I had them stashed away in the closet wondering what to do with them, until I found a free Angry Birds template for balloons on-line here. Ah! I was excited!  I printed and glued them on the buckets. 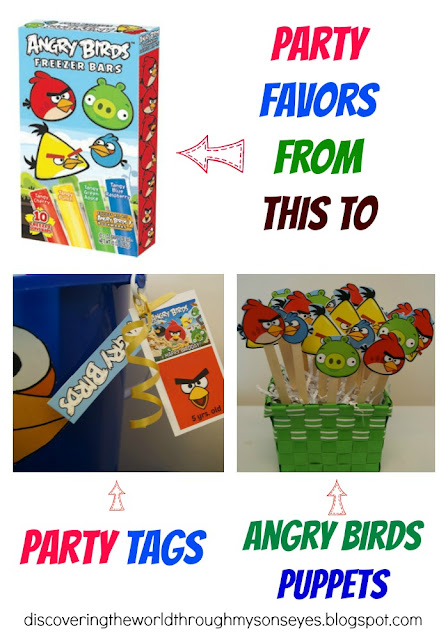 Inside the party favor buckets the children had Angry Bird freezer bars, Angry Bird graham crackers, Angry Birds gummies and jelly bean (wrapped in the shovel). I also included the Angry Birds puppets, crayons, a small coloring book, and Gazz-It!.  (Reusable modeling foam that I also purchased last year on clearance for 25 cents each!).  Then I used a ribbon for the Angry Bird party tags to tie on the side of the bucket. 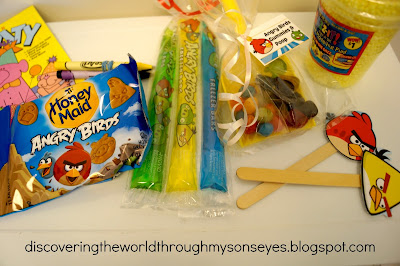 It didn’t cost much, and I’m sure the kids will love the Angry Bird buckets party favors!  Next post will be about the pizza and cake! 🙂
Spread the love
2013-07-12
Previous Post: Spanish Language Summer Program Day 4: Latin Children’s Song “Los Pollitos Dicen Pío, Pío, Pío”
Next Post: Letter To Our Son: Celebrating Your 5th Birthday