In: Multicultural Parenting
With: 0 Comments 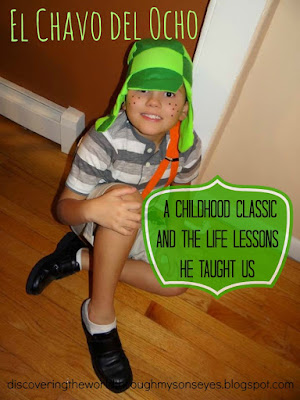 El Chavo is a timeless sitcom, and a classic in the homes of many Latin American families.

I grew up watching El Chavo del Ocho (the original version) not the animated one.   Every afternoon we would all prop ourselves (including my Abuela) in front of the TV to watch el Chavo and his friends from la vecindad in their daily adventures, and mishaps.

Having now my own child, and sitting together to watch the animated version with him is reminiscing of my own childhood memories.  We are bonding through laughter with el Chavo and his friend’s “ocurrencias” (funny things that they get into).

What I love about this time together is that it’s done in Spanish.  He’s listening to phrases such as, “con permiso dijo Monchito”, “chusma, chusma, chusma”, and “fue sin querer queriendo.”  Phrases that my son has used, and I just chuckle.  The episodes are short, as well as the dialogues. Thus, enabling my son  to learn new words in Spanish (including the Mexican slang ha!).

There are also many lessons to be learned watching el Chavo del Ocho:
and last but not least,
So this brings me to Hispanic Mama’s post on her 7-year old not liking el Chavo.  She ponders, “..on how many of the Latino children that were born outside Latin America would “get” this Latino classic.”  I can think of three little boys including my son, and nephew (cutie in the picture above) who were born outside of Latin America; one of them a non-Latino that love el Chavo!!!  They actually “get” it and they laugh with el Chavo and his friends from la vecindad.

My sister Diana shared with me, “El Chavo was always my favorite character growing up so seeing Nico loving it gave me great joy. Chavo was a character who gave me not only a connection to my Latin roots but a booster to help me get to school in the mornings. Dad thought the humor would help me and it did as I suffered from anxieties before school.”

Looking for a timeless classic in Spanish for your kids?  Introduce them to El Chavo!  Who knows he/she may or may not like it. 🙂

You can also check out these fun and easy Spanish books for kids, and there’s also a free app Aprende con el Chavo available in Google Play and in the App Store.

The pictures below are affiliate links. It means that if you purchase using the links below and if you make a purchase I will receive a small monetary commission. Thank you!