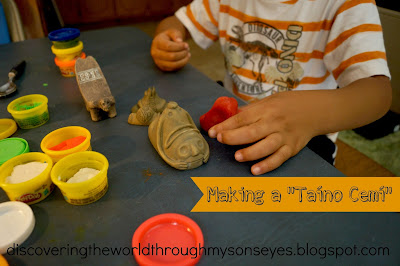 This is the second installment of Discovering Our Taíno Ancestry series.   In our first installment little one learned about his Taíno culture with a sensory “yucayeque” village that we made. Today’s post is all about learning more in detail about the cemíes and dujos that were in his yucayeque.  Luckily I was able to purchase small replicas during our visit to Puerto Rico this past summer, and he used those to make his own.
Little man had fun making the cemíes and dujos with play dough. He tried to make it to look like the replicas, and I think he was pretty close. 😉  Taíno indians carved the cemí from wood, stone, and/or clay. It was a three pointed sculpture that was the physical representation of Taíno deities (gods). Cemíes were said to invoke the spirit of the god Yucahú.
The Taíno religion was centered around the divine character or nature representing Yucahú the god of the yuca (cassava) and conservation, and Atabey the goddess of rain, river, and the sea. There were other minor gods governing the natural forces, and they were all conceived as a cemí. For example, Boinayel was the giver of the rain. Therefore, the cemí had the power to make it rain. The cemíes came in all sizes and mostly were three pointers.

Nitaínos carved elaborate cemíes and some were painted and decorated with gold and precious stones. Most of them had human facial or animal features carved on them representing a divine creator or a force of nature.

Little one also made dujos. The dujo is made from stone or wood with a raised tail used as a tall backrest, and they were short seats with four short legs with feet.  The caciques and bohiques were the only ones allowed to sit on it.  They were a symbol of prestige. 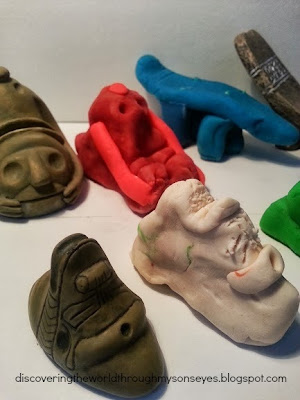 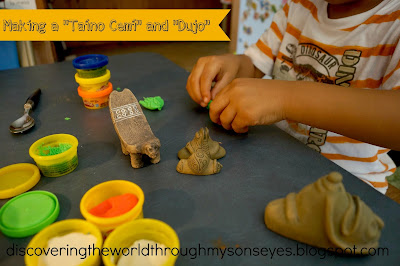 For more information about the Taínos click here, and here. Hope you enjoyed today’s installment of our series Discovering Our Taíno Ancestry. In our upcoming installments the coquí the unofficial mascot of Puerto Rico, do-it-yourself petroglyphs, and more!

Thankful for My Son’s Enthusiasm on Learning Spanish 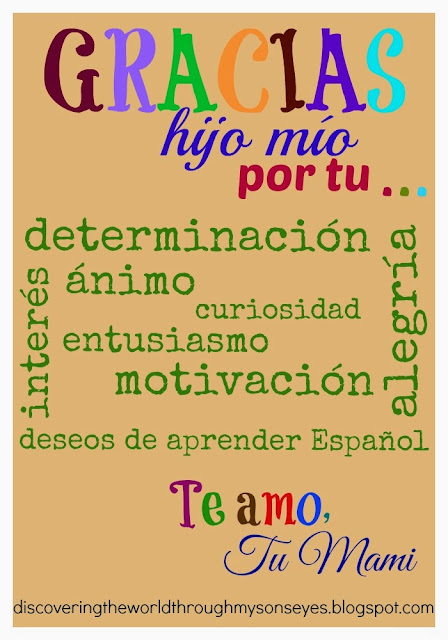 This past weekend as I sat at the table surrounded by books in Spanish, printables, and materials to teach our son Spanish – I felt overwhelmed. For a few minutes as I watched my son gather his toys from the floor to begin our lesson I thought, “Can I really teach my child to be fully bilingual, and biliterate?” I silently prayed to God to use me as an instrument to teach my child the gift of another language.